On Wednesday – at the very last minute – I missed the gym. I made up for it yesterday, though, in the garage, because the heat has now dropped to manageable temperatures. At 95 degrees, it was cool enough to get in a solid workout without creating a heat injury situation for myself, as almost happened last time! I did the workout in the middle of the day, too… had I done it in the morning, it would’ve been quite pleasant.

It’s been a while since I’ve trained Muay Thai, and I was really feeling it, so that’s what I did. I focused on just a few techniques, which I mostly practiced in shadow-boxing. I did work the bag a little with some kicks, punches, and spinning elbows, but not much.

So here we’ve got a whole slew of pics, because I thought I’d include some of my warm-up and stretching. Also, I included what I ate afterward. I went into the garage when I would usually be eating lunch, so I was famished!

I started with a light warm-up of jogging around the mat, then side-skipping each direction to warm up laterally. I threw hook punches while side-skipping.

Some agility work in with the warm-up… this is also a lateral exercise, alternately crossing one foot in front and behind the other while moving around the ring.

From the ground up, I warmed up my major joints in circular movements. Hip rotations are my favorite to do before any combat sport workout; the exercise loosens you up at the core, which helps loosen the whole body. 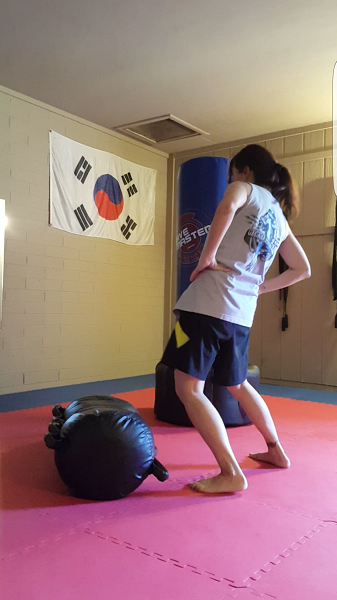 Next, I did a little stretching, as in, I probably only spent three minutes on it. This is not advisable… stretching is important. I’d usually spend a good 15 minutes stretching, minimum. My entire workout was only 40 minutes long, though, and only 30 of it was actual technique practice… in cooler weather, I’d do a longer workout. 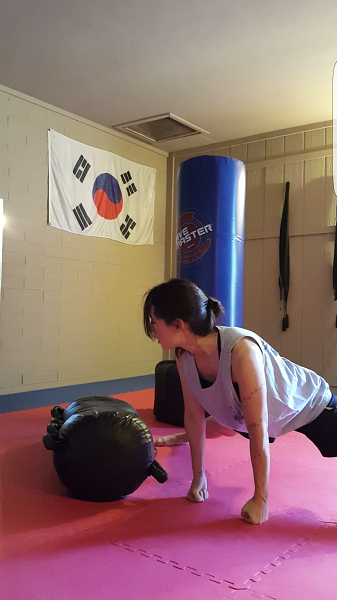 Then I got started. I spent a minute just moving around in Muay Thai stance so I could get comfortable in the feel of it again – it really has been a while! – before starting on the techniques I wanted to practice.

Muay Thai stance is not the same as boxing stance. The difference starts with your hips… your hips face forward in Muay Thai (toward your opponent). You stand taller, keep your guard up higher (and it’s an open hand guard), keep your elbows out a little bit, rather than holding them in tight… and rather than standing rooted, you’re constantly moving your feet, shifting your weight (kind of like walking in place) so you can react quickly with leg techniques. You have to be able to easily lift and maneuver your front leg, especially, to check (lift your leg to guard against) low roundhouse kicks!

The techniques I worked included striking defense, like slipping…

Slip to the right 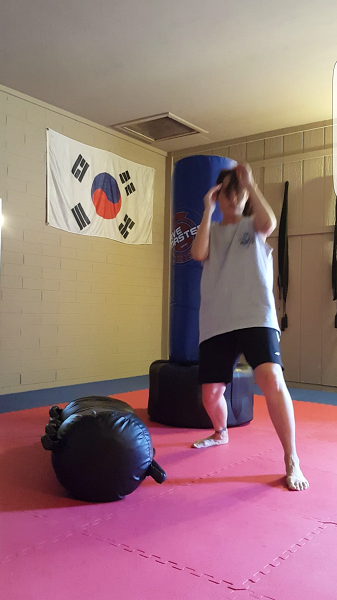 …slipping to the other side…

Slip to the left

(already pretty warm at this point) 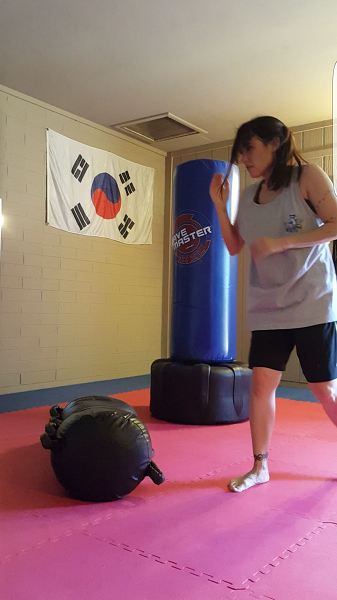 Working the teep (front push kick), which can be used in offense or defense…

This one’s the downward chop, a brutal way to get hit (this will cut you). Chambering my right elbow… 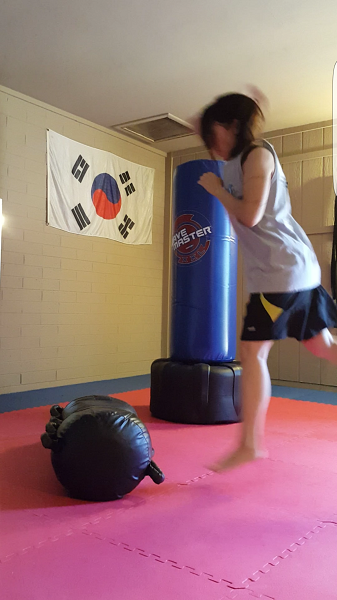 …and smashing it down. 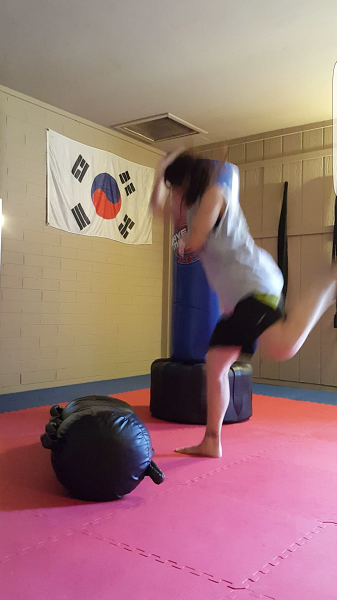 Working the low roundhouse defense… this is the leg check. Also, my right hand is up in helmet guard, while my left arm guards in front with palm facing out. With your palm facing out, you can catch and grab kicks.

Jumping in with a flying downward elbow… 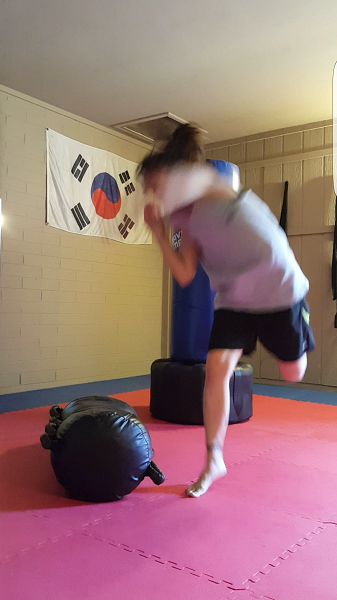 Not sure what was going on here; probably chambering a teep… 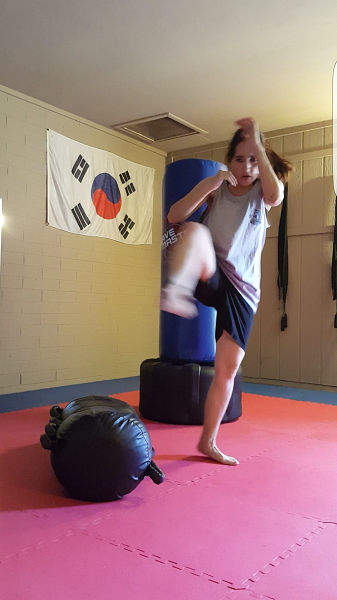 (working around to the back) 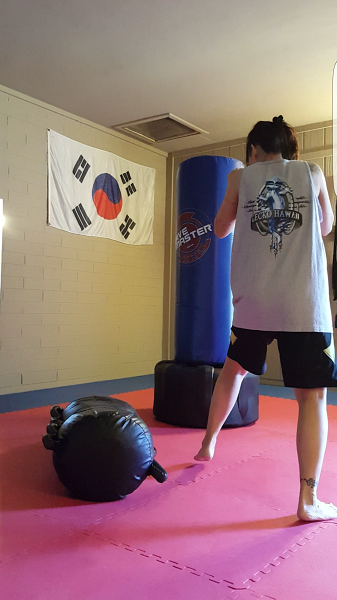 I just threw a few kicks and strikes on the bag. This is a cross punch…

Then down to the MMA dummy for some ground and pound. I also worked elbows on that bag.

Here I was resting, but also taking the opportunity to work my knuckles and forearms a little bit…

That was enough! Getting up to walk back. 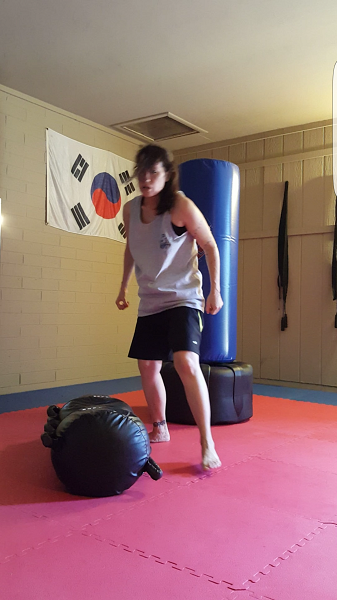 Walking back (hey, I was wiped out)

I have to say it again: I’m so grateful to have this gym at home. It accommodates a lot in the way of working out.