We flew back in quite late last night after four days out of town, and a busy four days, it was! We took a family trip to Hawaii, where my parents were born and raised, and where, in the homes of extended family scattered across three islands, I spent most of my summers growing up. In my adulthood, I’ve only visited my family on the island of Oahu, because that’s where my parents live half the time. My one adult visit to the island of Maui had been at the end of the 90’s when we went to Grandpa’s memorial service. Last week’s long-overdue return to Maui was also for a special family event, but a happy one this time: my brother’s wedding!

We had a fantastic visit with my parents, brother, and nephew, and we got to know new family members and friends, all lovely human beings. It was an enjoyable way to flex my minuscule extrovert muscles a bit! We stayed with my parents and nephew in a condo we rented in Kihei, a place rich with memories of my favorite beaches on Maui (and my one interesting encounter with a Portuguese Man O’War). We braved the mad tourist bustle of old-town Lahaina only twice, both for wedding-related events, including the wedding, itself. Well, the wedding wasn’t exactly in Lahaina… it was on a boat, but the boat departed from Lahaina.

The highlight of the trip was the wedding, of course, but I also wanted to show Callaghan as much of Maui as possible in the four days we had. He’d been to Oahu with me, but never to Maui, and I’d spent more time there at my grandparents’ house than anywhere. Thanks to my brother and parents, we were able to drive up to Hana (on the infamous Road, which is more of an attraction than Hana, itself, if you ask me – it’s an exhilarating ride, and there are fabulous places to visit along the way. More on that later!), attend a luau, and hit the haleakala volcano crater. The first important thing we did was visit a few precious sites in Kahului, Mom’s hometown. The last important thing we did was go to the beach, where I did a little training (beach workout post forthcoming!) and swimming.

Callaghan loved it. He was also fascinated to hear that a Jurassic Park helicopter scene (view) was filmed over the rain forests around the road to Hana.

It was good times.

I ended up with more pics than I could prepare all at once, but they’ll get captured in the next few posts. For this first installment, I’ll show you some of the things I ate during the trip, as a few of you were interested in seeing what a person can eat in Hawaii other than seafood and Kalua pig.

Without further ado, take a gander at what I ate on Maui, if you’re so inclined!

I had fruit on the flight going over:

Breakfast on the airplane

Dinner at the Old Lahaina Luau

For dinner at the BBQ my brother, his wife, and her family hosted at their house, I had salad, veggie kabobs, a little rice, and a few small potatoes:

Dinner at the BBQ

(Plate of fresh fruit for dessert not pictured)

For lunch at Ono Organic Farms along the road to Hana, we enjoyed the plethora of exotic fruit we tasted, some of which I’d never even heard of. My favorite was the rambutan, the barbed red fruit. I don’t remember the name of the spiky white fruit, but it was good, too:

For lunch at Zippy’s (it’s like a Denny’s; this one in Kahului is the first and only Zippy’s on Maui. I’d only been to Zippy’s on Oahu), I ordered their veggie-tofu burger, which I ate open-faced on a whole wheat bun: 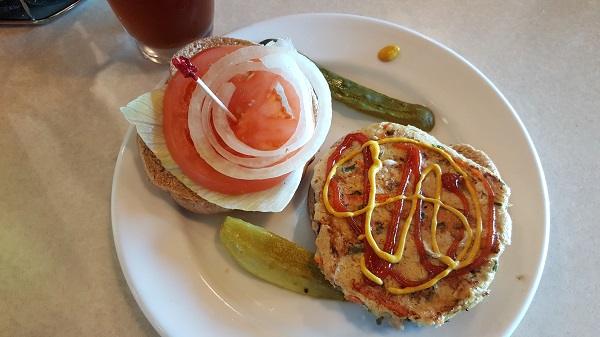 We also had lunch at good old Taco Bell one day, where I got the power menu burrito bowl. It’s like a Chipotle burrito bowl, but better, in my opinion! Black beans, rice, lettuce, tomato, guacamole, and six packets of diablo sauce:

And for lunch at Honolulu international airport heading home, we went to Chow Mein Express and had tofu, eggplant, and steamed white rice (they didn’t have brown). This was by far the best airport fast-food I’ve ever had:

During the trip, I also had a variety of protein/nutrition bars, raw nuts, and whole grain breads to fill in gaps. For breakfast, I had Dave’s power seed bread with coconut peanut butter (two ingredients: peanuts and coconut!):

A lot of wonderful local plants were consumed. But don’t worry… I did save some for the dinosaurs! The veggiesaurs.

2 thoughts on “I went to Hawaii and ate all the plants.”

Salem late at night. Night sight on my phone camera. This doesn't capture the force of the bond that she and I have, but it is there. 🖤