We’re on the eve of a new month, and we’ve got another Friday the 13th coming up soon! That makes two months in a row. In honor of the underrated yet overhyped doomsday of lore, I’ll regale you with an anecdote. Today is, after all, the halfway point between the two Friday the 13ths.

First, a refresher, or background information for those of you who are new here.

A few months back, Callaghan and I watched The Babadook, which I’ve since decided is the best horror film I’ve ever seen. Being a huge fan of all kinds of horror, including some of the cheesiest of the many bad movies the genre has to offer, I tend to rate a horror film based on its HMISM (How Much It Scared Me) factor. (I just made that up.)

It’s hard to get a good rating on the HMISM scale. I don’t scare easily. I have Exaggerated Startle Response, but that’s jumpiness, not fear… and it’s certainly not the same thing as a satisfying case of creeptastic-movie-produced heebie-jeebies. After a good horror flick, I’ll find myself looking over my shoulder apprehensively, and the back of my neck will prickle as I wander alone through the house. Not only did The Babadook have this delightful effect, but also, it was 99% cheese-free.

We knew we were sitting down to watch a horror movie, but we didn’t suspect we were in for an astonishingly terrifying, brilliant, richly layered and masterfully wrought horror movie. The Babadook has stayed with me, and I can easily call to mind its expertly applied sound effects.

This brings me to the weekend of our last Friday the 13th (two weekends ago), when I heard a mysterious triple knock in our bedroom.

Callaghan was at the gym. I was the lone human in the house, working on my laptop on the bed with Ronnie James and Nounours purring by my side. All was quiet, and then we heard it. Knock-Knock-Knock.

The kitties startled upright, and I looked around with all the neurons in my brain shining through my eyeballs as I tried to ascertain what I’d just heard, and where the sound had come from. It made no sense. It really sounded like someone had knocked on the wall from inside the room, but no one was there. There was no way the sound came from the front door, since that’s at the opposite end of the house.

A few seconds later, I heard it again. Knock-Knock-Knock. This time, it happened while I was actively looking around, and I didn’t see anything either directly or peripherally. There was nothing in the room that could have explained the sound, but I thought I heard it from the area of Callaghan’s night table. 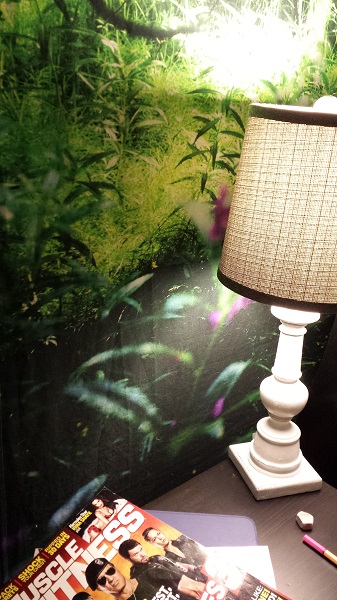 Just a night table with the usual stuff on it, right?

Naturally, I thought of The Babadook. That’s how the Babadook announced himself in the movie: Knock-Knock-Knock. The thought came to me with some amusement, but I was truly mystified. When I told Callaghan about it later, he said he had no clue what it could have been.

One day the following weekend – that would be last weekend – we were lying in bed, waking up slowly, when the triple knocking sound suddenly filled the quiet space in the early morning room. Knock-Knock-Knock.

“There it is again!” I said excitedly, happy to be validated by the recurrence of the sound. I hadn’t been sure that Callaghan believed me when I’d described it to him. He turned toward the direction of the sound, studying his night table.

“It’s this,” he said. He was extracting something from beneath a pile of magazines. I looked and saw that it was a small, slim tablet. With its dark blue cover, I hadn’t noticed it mostly buried on the dark table. 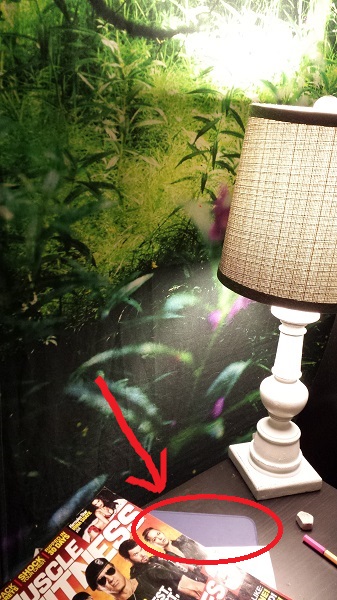 Why look at that. It’s a tiny tablet.

Of course! Now I remembered that little tablet… it was the mini Samsung Callaghan had given to his Grandmother in France last year, specifically so she could use it to Skype us. Mamie isn’t tech-savvy, so Callaghan set it all up for her, simplifying it as much as possible. She only had to open it, swipe the screen, and hit the Skype button… but she never did. She said that she wanted to use it, but it was too complicated. Eight months later, when Callaghan’s Dad visited us in December, he brought it back. I hadn’t realized it and I didn’t even remember that tablet, so it didn’t occur to me to check under the magazines when I heard the triple knock! 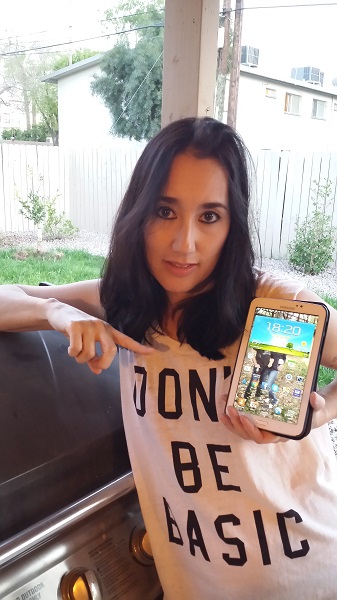 We took this pic last night to show the smallness of the tablet. It’s barely bigger than my hand.
(Yes, it was 18:20 and 75 degrees. Don’t worry. In a few months, we’ll deal with our scorching summer while you enjoy your well-deserved beautiful temps outside!)

Callaghan’s own tablet is a white, regular-size iPad in a white and red Eiffel Tower case. It’s quite conspicuous, and it obviously wasn’t on the night table when I’d first heard the knocking sound. And my tablet is a regular-size black Samsung with no case. I didn’t see any tablets when my eyes skimmed the night table. My powers of observation are slipping.

“Mamie must have set the sound notification to knock,” Callaghan said. “I didn’t do it!” We checked, and sure enough:

We tapped it and heard the triple knock. Each time Callaghan received an email, the tablet made that sound. Mystery solved, right?

I just don’t understand 1). Why Mamie would bother changing the notification alert sound if she never used the tablet, and 2). How she could have changed it if she was so reluctant to try the tablet that she never even hit the Skype button to call us. I mean, does this make any sense? The idea of Mamie fiddling around with the settings and changing things in there seems a bit far-fetched. For me, there’s still a feathery question mark hovering in the air above the whole thing.

After this upcoming Friday the 13th, the next one won’t occur until November… but somehow, I doubt the eight months in between will be uneventful!

2 thoughts on ““A rumbling sound, then three sharp knocks…””